Life in Kuwait during the fourties and fifties is one characterised by its harsh desert society, in which the role of an individual was often practical and dictated by the demand for skilled labour in the local shipyards. Kuwaiti society at this time had very little need for luxuries like art and painters. However, during this time and the museum’s co-founder Tareq S. Rajab’s early childhood, sailors were often observed creating charcoal drawings of their Booms or Baghlas, two of Kuwait’s most renowned and famous sailing ships. While art was almost a foreign concept in Kuwait, Tareq took great joy in sitting beside his grandfather Sayid Omar, a hugely accomplished calligrapher, while he worked at his desk and often marvelled at the collection of handwritten and illuminated manuscripts of the Qu’ran in his grandfather’s small library.

Sayid Omar was one of a few major influences on Tareq’s life and his developing interest in art. He was the first headmaster of Kuwait’s first public school, “Al Mubarakiya School”, and personally wrote the schools first textbooks. Sayid Omar dedicated his entire life to the school and taught generations of Kuwaiti’s. One of his many accomplishments includes writing the word “Kuwait” on the country’s first flag, which Sheikh Mubarak used as the national symbol of Kuwait.

The 1952/53 academic year at Al Mubarakiya was one that not only saw a turning point in the history of art education in Kuwait but one that would change Tareq’s life. Two schoolteachers, Mujib Al Dosary and Sherif Al Khadhra organised an art competition and began to teach their students oil painting and Islamic floral design. At the end of the academic year, an exhibition was put together, which Tareq won and was consequently rewarded by becoming the first Kuwaiti art student to be sent to the United Kingdom, ultimately gaining a degree in education from Bristol University and a teaching diploma.

On the 11th of July 1953, Tareq’s life was changed forever when he left the limitless desert environment of the Gulf, and Kuwait’s one-story sun-baked houses that he had always known and was thrust into the lush green countryside of Oxfordshire and Brazier’s Park, which became his new home. He was now required to not only learn a new language but to also learn a new way of life and took to these new challenges like a fish to water. One particular painting hanging by the great staircase at Brazier Park was a copy of “The Avenue at Middelharnis” by Meindert Hobbema which captured Tareq’s imagination and remained etched into his mind for the rest of his life.
It wasn’t long before Tareq attended art classes at Hastings and Eastbourne College of Art. At Eastbourne, Robert Tavener, Tareq’s tutor, introduced him to Islamic Art for the first time and encouraged him to visit museums and study their Islamic collections. Tareq soon discovered and developed an admiration for the lithographic work by David Roberts and began to collect some of his work with the pocket money he received from the Kuwaiti government. Around this time, Tareq met his future wife, Jehan, starting a brand new chapter in his life. 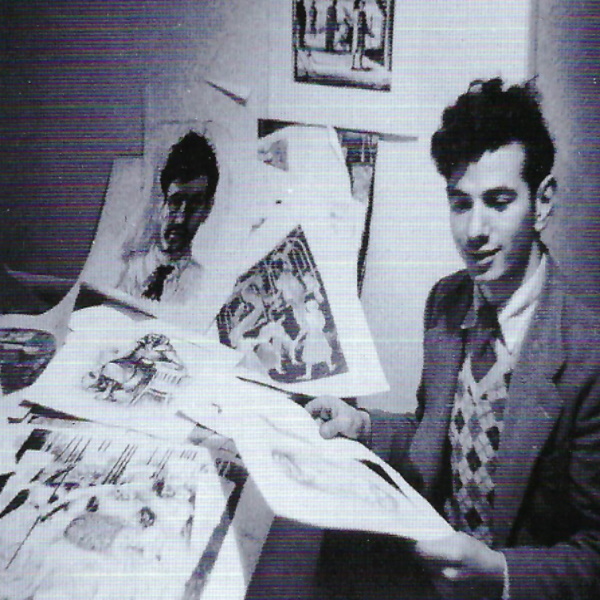 Tareq S. Rajab during his time studying art in England during the 1950's 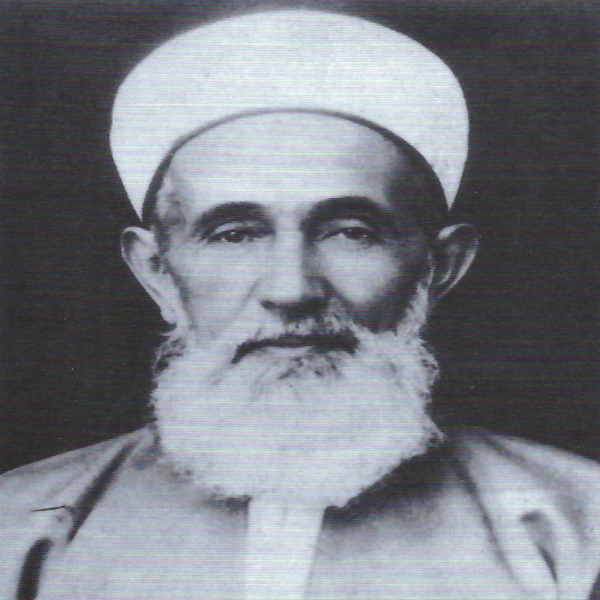 Sayid Omar - A scholarly calligrapher and Tareq Rajab's grandfather. He was an early influence on the development of Tareq's interest in Islamic calligraphy

Travels across the Islamic World

Upon completion of Tareq’s studies in 1958, he made his way back to Kuwait, travelling through Europe and exploring some of the worlds greatest capitals and centres of art along the way. After making it back to Kuwait, he arranged for his wife Jehan and their two children, Nur and Ziad, to join him. During his long journey home, Tareq took the opportunity to sketch and photograph as much as he could; however, much of his work from the trip and his five years in England was lost during the Iraqi invasion and occupation of Kuwait (1990-1991), when his office was looted by Iraqi soldiers.

After his return, Tareq became an art teacher at Salah Al-Din Model School before the Department of Education appointed him “Archaeological Supervisor” on the Island of Failaka, where a Danish team of archaeologists led by Professor P. V. Glob and Geofrey Bibby had been working since 1958. Their excavations had uncovered interesting sites dating between the Bronze Age (~2500 BC) and the Greek Period (~300 BC). Before long, Tareq was sent abroad again, to Denmark, spending one year at the Forhistorisk Museum of Aarhus, where the Danish team working on Failaka was based and where the finds from the island were sent for study and conservation. Tareq spent the year reading archaeology, excavations and museum techniques, participating in local archaeological digs in Denmark. Upon his return to Kuwait, he was appointed as the first Director of the Department of Antiquities and Museums until leaving the post in 1969 to found the New English School, Kuwait’s first private, co-educational day school to offer a British style curriculum from Kindergarten to A-level.

As Director, Tareq reorganised the Kuwait Museum, saved Bayt Al Bader and two of the old gates from the Wall of Kuwait, which was demolished in 1957 and established archaeological and ethnological museums on Failaka Island. However, much of old Kuwait could not be saved. During the formation of the ethnological museum on Failaka, Tareq and Jehan both spent time with the local population, known as “Failachawi’s”. They persuaded them to part with some of their precious old possessions, ploughs, sickles, household goods, rose-water containers and old Kuwaiti chests, which ultimately helped to form the island’s ethnological museum’s collection. It served as a constant reminder of the population’s hard-working life in an ever-changing world. However, these buildings, a recently excavated Nestorian Church (~3rd/4th century AD) and the entirety of Failaka were eventually left in ruins by the invading Iraqi’s during the Iraqi Invasion and Occupation of Kuwait (1990-1991). Thirty years later, the future of Failaka and its archaeological past remains uncertain.

After the births of their three children, Nur, Ziad and Nadr, the family was complete, and their adventures across the Arab and Islamic world began. Tareq and Jehan decided that the best way to travel was by car, and so, during the summer’s, the family visited as many archaeological and historical sites across the Middle East and Europe as humanly possible, stopping to photograph and record as much they possibly could. Although many of the photographs taken during these long trips were lost during the Iraqi invasion, many did also survive, and make up the “Glimpses From The Last 50 Years“; a photographic record of the family’s trips around the world, sold at the Museum. 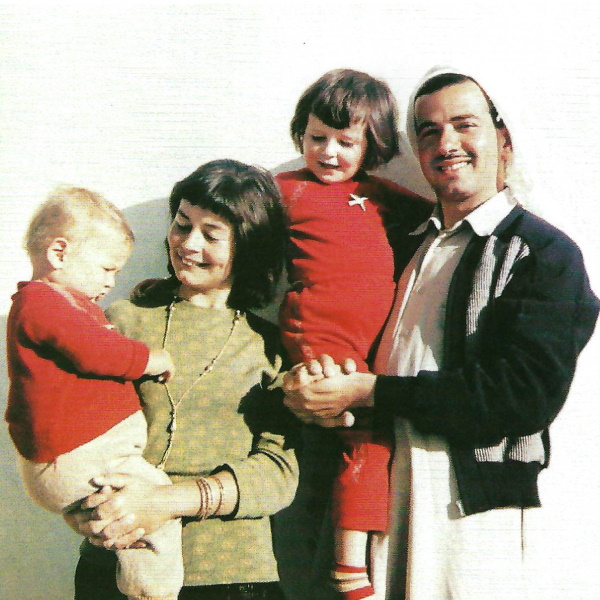 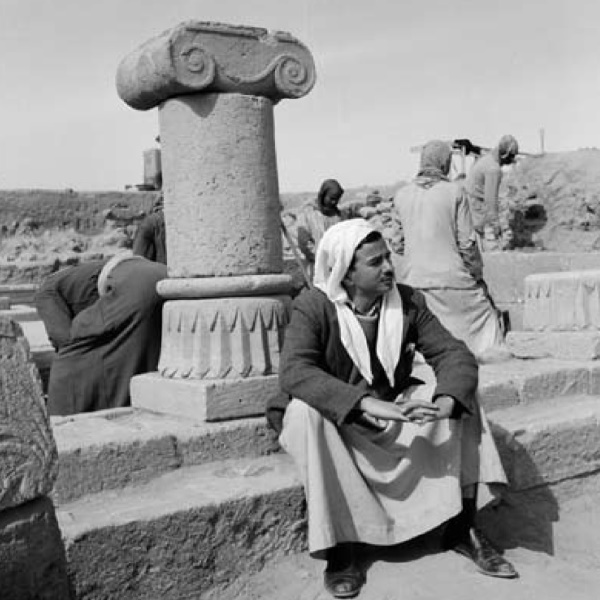 In 1980, Tareq and Jehan realised their ambition. They opened the Tareq Rajab Museum to the general public, bringing together an extensive private collection of Islamic art, illustrating different aspects of Islamic civilisation from its earliest periods to modern times. The museum has been open ever since, with the Iraqi invasion and occupation of Kuwait (1990-1991) and the Coronavirus pandemic the only exceptions. The museum is home to beautiful Qur’ans and manuscripts from across the Islamic world, including an extremely rare example of a Ma’il or Hijazi folio from the 7th century AD (1st century AH). Important works by famous calligraphers such as “Yaqut al-Musta’simi” are also housed in the museum. Also displayed are fine examples of Islamic pottery and ceramics, glass, metalwork, arms and armour, scientific treatises by figures such as “al-Kindi” and “al-Ba’albaki” and important ethnographic and cultural objects including jewellery, musical instruments, textiles, embroideries and costumes. The objects are representations of the entirety of the Islamic world, spanning not just the affluent and the aristocracy but also the hard-working villagers and nomadic peoples.

In 2007, both Tareq and Jehan opened a new, purpose built museum named the “Tareq Rajab Museum of Islamic Calligraphy“. The museums calligraphy collection helps to trace the development of the Arabic script from the advent of Islam onwards. Arabic served as the chosen language for the words of the Holy Qur’an, which were revealed to the Prophet Muhammed (PBUH). After this, Arabic script began to develop rapidly, evolving from the simple script known at the time to one of the most diverse and flexible in the world. Arabic script was consequently used in decorative form to decorate ceramics, metalwork, glass, textiles and architectural facades. The museum contains fine examples of all such mediums created by Muslims all over the world including, four large curtains from the door of the Holy Ka’aba, called Burqa, located at the heart of the museum.

Jehan and Tareq both passed away in 2015 and 2016, respectively, leaving a lasting imprint on both Kuwait, and students from the New English School. Their legacy endures through their three children, nine grandchildren and seven great-grandchildren.

Tareq and Jehan's children Nur, Ziad and Nadr in Syria on the Roman Road that runs from Aleppo to Antioch (1966) 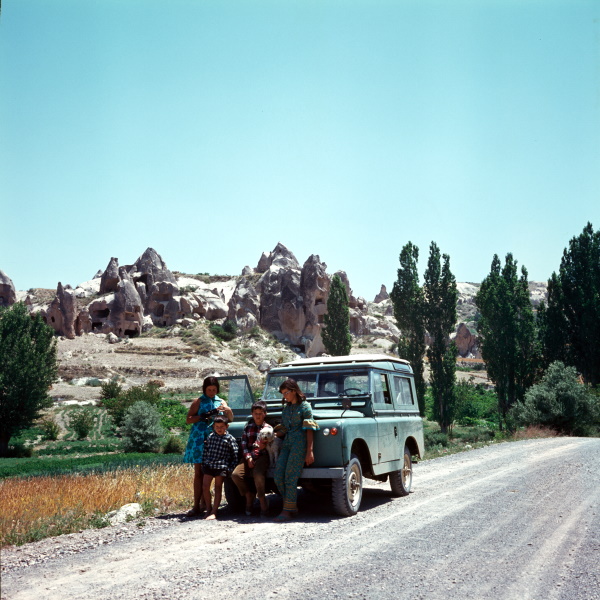 Jehan, Nur, Ziad and Nadr with their Land Rover. The family drove the car during their many travels across Europe and the Islamic World. Unfortunately, the family's Land Rover was lost during the Liberation of Kuwait in 1991 (1968)