One of the oldest known surviving documents that references the use of gunpowder is Chinese and dates from AD 1044. This formula for gunpowder was eventually passed through nearby India and then Persia before reaching the Arabs, with the first reported use of gunpowder in Europe occurring during an Arab siege in Spain in AD 1324. It is this use of gunpowder and firearms that ultimately allowed the Ottoman Turks to crush the armies of Aq Qoyunlu, the Safavids, Mamluks and Eastern Europe in the 15th and 16th century AD. The Mamluk Sultanate, like most Muslim states of the Middle East at this time, intensely disliked the use of firearms in warfare and resisted their adoption until they were eventually defeated by the Ottomans. Upon the Mamluk Amir Kurtbay’s defeat at the battle of Marj Dabiq in AD 1516, he was brought before the Ottoman Sultan Selim the Grim and is recorded to have lamented “We are the people who do not discard the Sunna (practices) of our Prophet Muhammed (PBUH), which is the jihad (Holy War) for the sake of Allah with sword and lace. And woe to thee! How darest thou shoot firearms at Muslims?”. The success that the Ottomans enjoyed on the battlefield is what lead to the adoption of firearms across the Islamic world and India. The importance of the adoption and use of firearms in the Near and Middle East cannot be cannot be underestimated, with their use ultimately working to shape the history of the entire region. 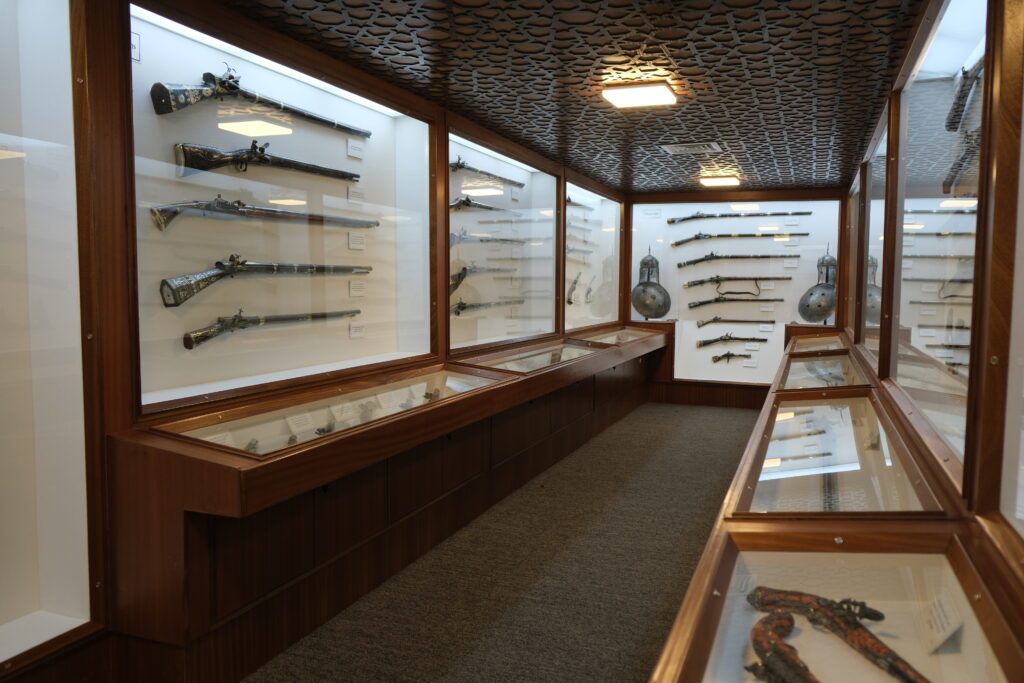 The Tareq Rajab Museum’s collection, which numbers close to 200 antique firearms, contains examples from across the Islamic World, from North Africa all the way through to South East Asia, showcasing the evolution of Islamic firearms and the unique characteristics adopted by each culture for their own respective firearms. While these Islamic firearms merely form a small portion of the Museum’s total collections, the importance of such a collection cannot be understated because very few if any permanent collections of antique firearms of the quality and quantity have been made since the days of the great private collectors of the 19th century AD. Through the Tareq Rajab Museum, the Kuwaiti public and its visitors have access to a collection of antique firearms with fine examples that equal the quality of the best firearms found in the Tower of London and the Dresden Armoury. 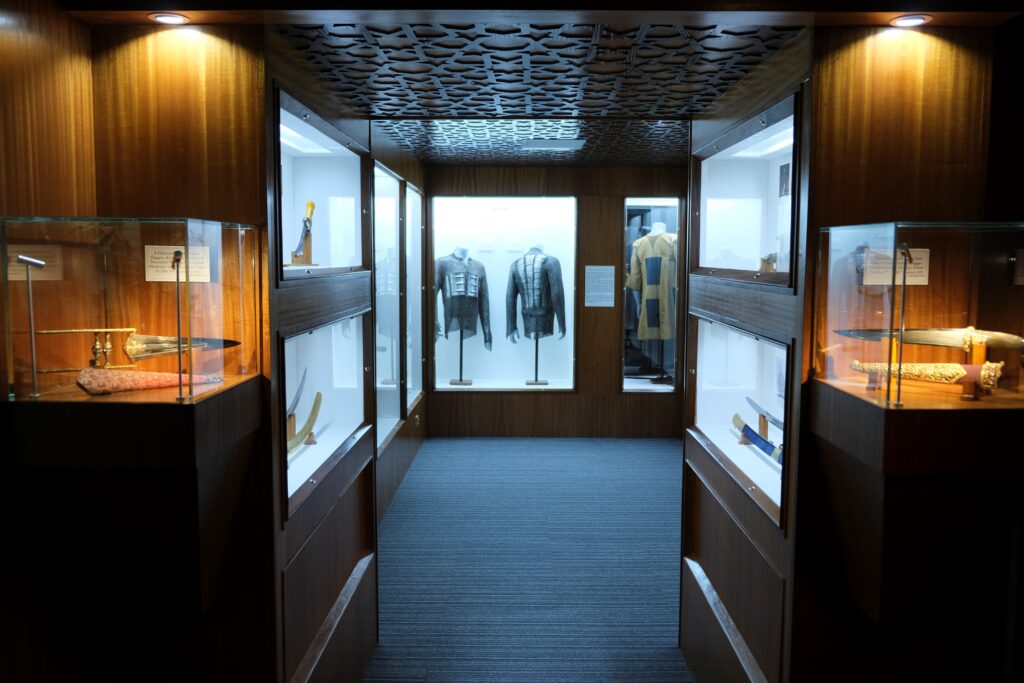 The Tareq Rajab Museum possesses a large sword collection, of which, 41 are currently on display. Much like the firearms collection, the sword room showcases and highlights both the differences and similarities of swords from various regions of the Islamic World. On display are examples from Arabia, Ottoman Turkey, North Africa, Persia, Afghanistan, The Caucasus, India and South-East Asia. Also on display within the room, are 2 fine 17th/18th century AD Indian chainmail shirts with overlapping armoured plating. Notable examples on display within the room include swords and daggers once belonging to Sheikh Abdullah Al-Salem Al-Sabah, the founder of modern Kuwait and Sir Bijay Chand Mahtab, the Bahadur of Burdwan, Bengal Presidency, Francies Rawdon-Hastings, the 1st Marquess of Hastings and Governor-General of India and Sir Richard Turbull, the High Commissioner of Aden.

A few examples of the notable objects housed in the museum